The Aches, the Pains, the Aches of Overuse

The cycle works thisaway: you run two races back to back in the fall, without reaaaalllly being in super-great running shape. This causes your knee to get a little sore. That gets worse as you keep running on it. You look it up: it's patellar tendonitis (tendinitis?), probably. You keep running on it, but maybe a little less.

Flash forward to February. You've been running a little less each week, trying to give it time to heal, but you don't want to stop running, because then? Fat. So you run 9 miles one Sunday. Take Advil. It's fine!

Run three miles the following Thursday and strain your calf.

But that sounds like underuse, you'll observe. But not really. It's really overuse of something that wasn't ready to be used quite so much. 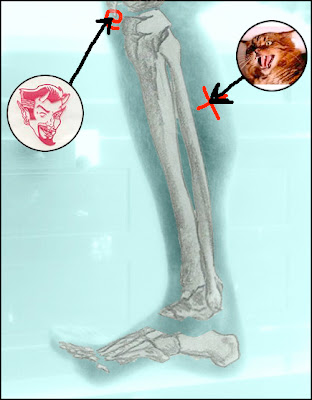 So from now on it's up early to write. Doctor's appointment soon. No running this weekend. Note to self: avoid cheese.

I hear ya. Hang in there.

It can be both: tendonitis or tendinitis. Rest is the main treatment. If pain is severe, hydrocortisone injections. But rest, rest, rest is required. Not eagle spotting...Please, rest sir. All the best.

By the way, I had always heard that the Devil was in the details. But now, as you have shown us, he seems to be in your kneecap.