In 2001, my friend Mark started walking from New Jersey to California. Several months later, in Sioux Falls, SD, he decided he was finished with the heat and mosquitoes, and came back to New York.

This March he set out again. I got a call from him tonight outside of Bancroft, Nebraska, and he wanted you all to know he was doing very well, but wouldn't mind a cool drink of water from friendly strangers now and then.

Please to visit his site and read his blog, then tell your Nebraskan friends to keep a friendly eye out, and wish him well. Someday you'll get to see the full documentary, the quality of which can be deduced from the trailer he made for a filmed version of his first trip. 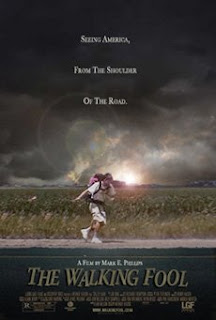 The WF's blog seems to end on May 19. Hope he is doing okay.

If he's coming through Boulder, CO, send him our way.

And he's out around Newport, NE, as of 7/8, walking the Cowboy Trail. He's mailing some notes to his friends (me, in this case) to use to update the blog.