I Feel the Earth Move, Under My Recycling Bins

A wee seismic shift has taken place in our area, apparently, because as of the other day our mudroom door frame is canted about a half-inch to the right. So it doesn't, you know, open. Which is better than it not closing, but only marginally.

Our mudroom is a small booth tacked on to the western end of the house, an add-on to the add-on that formed half the kitchen and the bathroom at some unspecified point in the past. It sits atop two projecting piers of cinderblocks which rest in turn on a concrete slab. "Tacked" is generous. The assembly has but a passing relationship to the house; it's not actually attached, as far as I can tell, except by the outer vinyl skin and some spit.

It's the slab that's the problem. I'm pretty sure they* dug down about four feet, to get below the frostline six inches, filled the shallow square with concrete, let it set, then stacked cinderblock on that, slapped a deck on it, some studs, sheathing, etc.

When we bought the place, the bottom two courses of block on the north side were detached and sinking. The slab has a crack through the middle, and the north side slopes down a little, maybe an inch or two. Enough to cause the two rows of cinder blocks to sink down and detach from the upper course, which is bolted to the sill plate. Which was essentially being held up by the sheathing, and maybe a single point of contact with the mortar on one of the cinder blocks below.

Somehow I convinced myself that it was okay; that the magical elves who lived in the stone wall would appear each night to touch the house where it hurt final price we negotiated was proportional to the house's flaws. I did a temp-to-perm fix by installing that friend to the swamp-dweller, the jack post. (And was very proud, given my tool skills. I used a level.) If your earth is flawed, screw a couple of these babies into position and adjust them every once in a while.

But this week, the south side let me down.

Something down there is giving way; I assume the cold is responsible, as that's the new piece of the equation. There's also a curious buildup of ice outside the mudroom, at the foot of the back steps. Which is odd, because it hasn't been above freezing in a week and a half — so how did water get there? What excellent mysteries — the kind I would love to read about someone else solving.

Home Depot's closed at the moment, but I'll be going there soon. Because you can trust a jack post to make everything level. 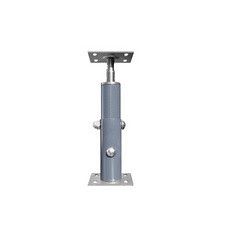 *They worked on your house too, didn't they? I'll bet they did. An electrician who looked inside our walls suggested that "Larry's brother-in-law" had done some of the work. Yeah, that guy. And his friend from community service. Them.