It hit me as I scanned the narrow patch of open sky behind our house, trying to figure out where to attempt tomatoes again: we live in the woods. It doesn't always feel like woods, what with the cleared land next door where the library and ballfields are and the main road not far off, but stitching together the open space, set off just slightly from the houses, are woodlands and scrub, with towering, massive oaks, mature evergreens of several varieties, black walnuts, opportunistic maples and who knows what-all.

This luxuriant cover does not admit much sun for vegetables. But right up against the house I think I've found a spot, between the heating oil fill pipe and the Bilco doors, that will get sun longer than any other part of the property. It's about six feet wide, this patch, and could comfortably extend out about six feet from the wall. Okay, fine -- two tomatoes, two sunflowers (school project), two cukes.

Except that to put seeds in the ground is to serve a salad bar for our friends the whitetailed deer, Odocoileus virginianus. So I'm going in heavy. At the last house, I dug a 12x16' patch in the front yard beside the driveway and built what I called the Plant Detention Center: heavy-gauge chicken wire strung on eight-foot two by fours set in concrete, with a gate and everything. It was hideous. However, the plot produced decent crops of strawberries, broccoli, tomatoes, tomatillos, peas, green beans, cucumbers, zukes, one green pepper, marigolds and probably some other things. The couple from the Bronx who bought our house that May tore down the PDC before the strawberries came up. The blank stares they leveled at me over the closing table while I told them that actual strawberries were going to come out of the dirty ground in about a week was one of the first inputs that eventually resulted in the name of this blog.

"But this is only going to be six by six feet," you say. Deer don't care. The library tried to grow sunflowers in a similarly-sized patch, but after a few months had produced just twelve thin brown sticks about eight inches tall. They had used thin nylon netting and five-foot metal posts driven into the ground, and at night the laughter of the deer while they pushed it over and ate the budding stalks was a terrible thing. I blame Lopsides and his posse.

And because I cannot think to scale, I am building PDC CB2. This one will be a freestanding booth of pressure-treated two by fours with a gate (or possibly a screen door) set into the front. CB2 will have three sides, the back of it abutting the wall of the house. It will make the first PDC look like the Taj Mahal. 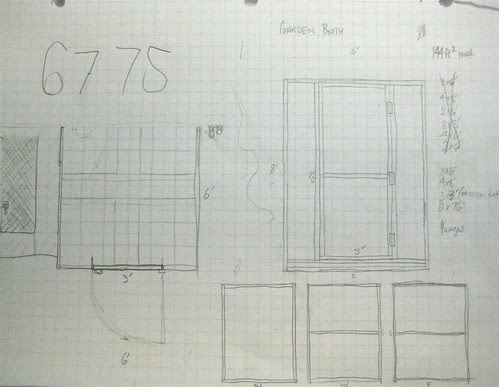 Here in the Loire Valley, we have roe deer. Much smaller than your variety but with the same appetite. We fenced in our property the first year to keep the dog in and the deer out.

It seems to have worked. The garden has been spared.

I like your plan. Frankly, one can never be too prepared for deer. They're crafty and persistent. Good luck.

Oh, you should hear me go on about sump pumps. I've enthralled (put) and (to) calmed (sleep) legions with that schtick.

The best post was the Star Exurbitude. I'm still in awe.

The best post was the Star Exurbitude. I'm still awed.

If you have black walnut trees you will have a problem growing tomatoes. Something about the soil. I can't remember what it is - but you might look into it. I had to put mine in pots and I could only do cherry tomatoes with very few results. Good luck though!!! I agree with getting a dog though...