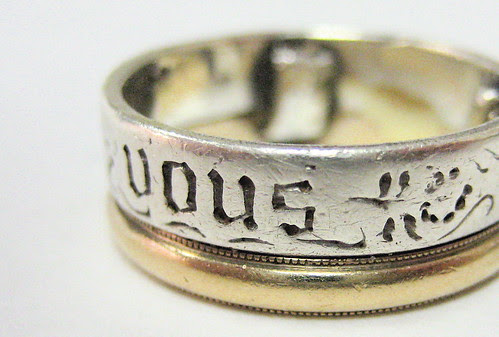 Gold is a soft metal, but it can take a few scrapes and look good. That thin band with the milled edge isn’t quite the same one she placed on my finger ten years ago—you can see where it’s been dinged a few times, and it’s now attached to the silver engagement ring she also gave me.

The silver ring—it came from the Museum Company store—is scratched in places, the design worn and weathered on the bottom. Although it’s a circle, it does have a bottom: I always wear it with the “vous” uppermost, partly because that's the first word of the sentence that runs around the band, but also because I had two metal bits soldered to the opposite side of the inside rim so that it would fit when I lost all that weight, and they nestle properly in the inside bend of my knuckle. Around that same time I had the two rings welded together—they were too loose, rattling around up and down my suddenly-slenderer finger, and the wedding band seemed lonesome and thin by contrast with the other when they were apart.

We resisted marrying near her parents’ house at first, then later bought the house from them and lived in it, then moved someplace else. Now we drive past the country club where our ceremony took place, several times a week, never having dreamed that it would be part of our landscape. A close friend of ours drew the place eight years before we married and gave us the drawing a couple of years ago. We hung it up near the foot of the stairs.

The guy we bought the wedding band from—Ben Moses was his name, on 47th Street—made a big deal out of the “milled edge,” like grinding a pattern into a thin 14-karat ring should add some kind of premium to it. I haggled a little, I won’t lie, it seemed like the right thing to do, especially after he tried to engage me in sports talk. He played along. It was nice. Ben Moses’ handshake was firm and lasted and he looked me in the eye, then turned to speak about me to my then-fiancé without letting go. If I wanted to buy something like that again, I’d go to him.

My left ring finger is thinner now, and the ring’s occasionally run into some things hard enough to scratch it, but the scratches catch the light. On the inside of the ring, the part that touches my skin, the weld is not decorative. The metal lumps soldered in there are crude-looking, too. But it has never fit better. And both it and I are stronger than when she married me.

Congratulations to you both!

Félicitations! Ten years is an important milestone. Wishing both of you many more. All the best to the family on this special day, and ever!

That is a lovely piece of writing.

Happy Anniversary to you and CJ

Well written. What an amazing tribute to the love and respect that you have for your wife.

Thank you all. Too kind.

Congrats to you guys! I love that your ring(s) are different looking and have personality. Very cool. (It's our 10th year as well. Must be something lucky about '98.)