Look out, goats, I'm on the move

Each day my commute takes me over something we apparently call the "Goat Trail," a snaky portion of NYS Route 6 that bounds its way around Anthony's Nose and south above the east bank of the Hudson, rising and falling and lurpling and slappelling (those are specific types of curving manoeuvres) as it heads down toward Peekskill. I was surprised to note that everyone calls it the Goat Trail—when I tell people from around here that I work in Westchester, they all ask whether I take the Tappan Zee or the Goat Trail.

I take, of course, the Goat Trail.

Had I known that my eventual route was to be called the Goat Trail, I would have quit my job in New York much earlier and just started commuting over it anyway, with the job as a secondary consideration.

Someone else's photo. That's the Goat Trail to the right of the bridge, blarkling up the mountain: 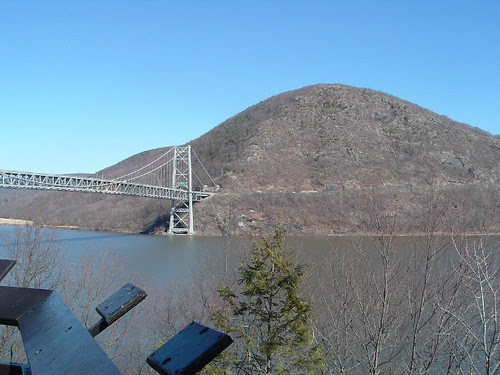 Wow, I grew up about 8 miles from there and never knew it was called the Goat Trail. To me, it was always "that road that makes me car sick." And I never saw a goat on it. Are there goats now?

There's a saying about you. They say "Susan? She grew up about eight miles from the goat trail, if'n you know what I mean."

They actually called me Goat Susan. There's a legend 'round them parts about me.